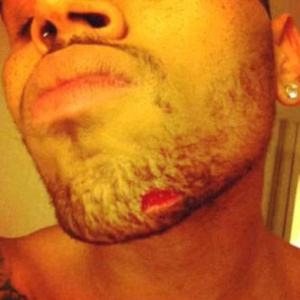 Chris Brown was left with a deep cut on his chin and one of his bodyguards seriously injured after a fight with rapper Drake’s entourage at a club in New York City Thursday.
The entourage of both stars were partying at SoHo club W.i.P., started throwing blows and bottles over Brown’s ex-girlfriend Rihanna.
A stylist on the scene told reporters that after an unknown provocation, a member of Drake’s entourage picked up a glass bottle and hit Brown in the face with it. From there, the fight turned “crazy” with glasses, bottles, and other objects flying in different directions from the two artists’ entourages.
Rihanna dated Drake after breaking up with Brown three years ago. The R’n’B singer/actor beat up Rihanna after they attended a pre-Grammys party on Feb. 8, 2009.
Brown tweeted a photo after the fight showing a cut on his chin. According to reports, he also tweeted, “How u party with rich n—- that hate? Lol….Throwing bottles like girls? #shameonya!”
Brown’s bodyguard, Big Pat, was badly hurt in the incident, sustaining injuries to his head.
It’s however confirmed that Drake and Brown never touched each other during the whole incident.
New York Police Department officers were called to the scene, but not before Brown and Drake left.